It may come as a bit of a surprise to many, but Ireland is a net importer of potatoes.  Historically, the United Kingdom has been by far Ireland’s biggest source of fresh potato imports with nearly two-thirds of all fresh potatoes being imported from UK.

According to official trade stats, the Republic of Ireland (ROI) imported just under 100,000 tonnes of fresh potatoes last year from Great Britain while Northern Ireland (NI) imported a further 40,000 tonnes.  That equates to an estimated 450 million individual potatoes (or around 90 potatoes per person).  For all sectors (Fresh, frozen, processed, crisped) that figure rises to 185,000 tonnes (raw equivalent) of potatoes exported annually from UK as a whole to ROI. 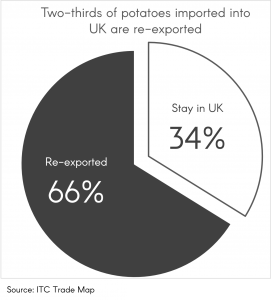 In total, nearly two thirds (61,000) of fresh potatoes imported into Ireland in 2019 were imported from Britain.  Inter-Ireland trade is also an important element with around 10% of the Republic of Ireland’s potato imports coming from just across the border in Northern Ireland.

With the UK’s transition period for leaving the European Union (EU) due to come to an end on 31 December 2020, new trading arrangements will come into force.

We believe Irish importers and wholesaler will increasingly turn towards building relationships with suppliers in France, Belgium and the Netherlands to source potatoes for import into Ireland to avoid the new customs friction and overheads.  HANNON Transport will be able to provide smooth door-to-door delivery of EU goods either via T2 Internal Transit (GB land bridge) or direct ferry.

In preparation, the HANNON Group has established a new operating base in Rungis International Market, PARIS to complement our hub in Rotterdam, Netherlands.

We have also developed relationships with customs agents who will be able to speedily and very cost-effectively process T2 Internal Transit which will be required should goods travel via the GB land bridge rather than a direct ferry route. (Direct EU – Ireland ferry routes will require no customs at all for EU goods of origin)

We use cookies on our website to give you the most relevant experience by remembering your preferences and repeat visits. By clicking “Accept All”, you consent to the use of ALL the cookies. However, you may visit "Cookie Settings" to provide a controlled consent.
Cookie SettingsAccept All
Manage consent

This website uses cookies to improve your experience while you navigate through the website. Out of these, the cookies that are categorized as necessary are stored on your browser as they are essential for the working of basic functionalities of the website. We also use third-party cookies that help us analyze and understand how you use this website. These cookies will be stored in your browser only with your consent. You also have the option to opt-out of these cookies. But opting out of some of these cookies may affect your browsing experience.
Necessary Always Enabled
Necessary cookies are absolutely essential for the website to function properly. These cookies ensure basic functionalities and security features of the website, anonymously.
Functional
Functional cookies help to perform certain functionalities like sharing the content of the website on social media platforms, collect feedbacks, and other third-party features.
Performance
Performance cookies are used to understand and analyze the key performance indexes of the website which helps in delivering a better user experience for the visitors.
Analytics
Analytical cookies are used to understand how visitors interact with the website. These cookies help provide information on metrics the number of visitors, bounce rate, traffic source, etc.
Advertisement
Advertisement cookies are used to provide visitors with relevant ads and marketing campaigns. These cookies track visitors across websites and collect information to provide customized ads.
Others
Other uncategorized cookies are those that are being analyzed and have not been classified into a category as yet.
SAVE & ACCEPT