Prior to 01 January 2021, 80% of all Irish road freight to and from mainland Europe passed through the UK and in and out of Ireland via the GB land bridge and the UK, Netherlands and Spain combined to supply more than 80% of Ireland’s fruit and vegetable imports.  (The land bridge was equally important to Irish exports to mainland EU)

The UK was also Ireland’s number one source of fruit imports.  These figures were well known – being regularly quoted in many BREXIT-related articles over the past few years.  What wasn’t so widely appreciated was just how reliant the UK’s position as key supplier to the Irish market was on its downstream EU mainland fresh fruit and vegetable supply lines from France, Netherlands and Spain.

French, Dutch and Spanish exporters and wholesalers found it convenient to treat the UK & Ireland as one, homogenised market linked by shared language, geographical proximity and EU membership.  Many mainland EU exporters took advantage of this to consolidate loads into Great Britain and then use GB as a hub to then serve the Irish markets.  The new post-BREXIT reality means that model no longer makes sense for many companies. 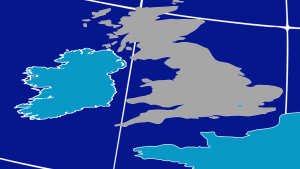 The island of Ireland (North & South) remains in the EU customs territory.

For many European suppliers a big surprise has been how problematic it has been attempting to serve Northern Ireland out of GB bases or hubs.

EU suppliers have quickly found out that, what was once simple, now involves a mountain of extra time, effort and money to both export goods from mainland EU to GB only to have to repeat the process to export from GB to enter the island of Ireland which (North & South) remains in the EU customs territory.

Many European companies are quickly changing their supply lines to move to Irish hauliers who can deliver direct to the Irish market via T2 Internal Transit rules (or direct ferries) and in turn building direct relationships with Irish customers and wholesalers.

The direct ferry option does remove all paperwork requirements however it does come with a penalty in terms of end-to-end journey time.  While not completely frictionless, T2 Internal Transit does avoid the most burdensome levels of paperwork and cost while still delivering the journey time and time-to-market that many fresh produce suppliers are so reliant upon.

To further streamline and reduce risk, European fresh produce suppliers to the Irish market are increasingly seeking to partner with hauliers and logistics providers who have put resources in place to provide customs services in addition to transiting the goods.

Talk to us about our European Logistics & Customs Services

For more information surrounding BREXIT and how it could impact your business and its supply chain, take a look at our previous BREXIT postings. The links to which can be found HERE.

We use cookies on our website to give you the most relevant experience by remembering your preferences and repeat visits. By clicking “Accept All”, you consent to the use of ALL the cookies. However, you may visit "Cookie Settings" to provide a controlled consent.
Cookie SettingsAccept All
Manage consent

This website uses cookies to improve your experience while you navigate through the website. Out of these, the cookies that are categorized as necessary are stored on your browser as they are essential for the working of basic functionalities of the website. We also use third-party cookies that help us analyze and understand how you use this website. These cookies will be stored in your browser only with your consent. You also have the option to opt-out of these cookies. But opting out of some of these cookies may affect your browsing experience.
Necessary Always Enabled
Necessary cookies are absolutely essential for the website to function properly. These cookies ensure basic functionalities and security features of the website, anonymously.
Functional
Functional cookies help to perform certain functionalities like sharing the content of the website on social media platforms, collect feedbacks, and other third-party features.
Performance
Performance cookies are used to understand and analyze the key performance indexes of the website which helps in delivering a better user experience for the visitors.
Analytics
Analytical cookies are used to understand how visitors interact with the website. These cookies help provide information on metrics the number of visitors, bounce rate, traffic source, etc.
Advertisement
Advertisement cookies are used to provide visitors with relevant ads and marketing campaigns. These cookies track visitors across websites and collect information to provide customized ads.
Others
Other uncategorized cookies are those that are being analyzed and have not been classified into a category as yet.
SAVE & ACCEPT